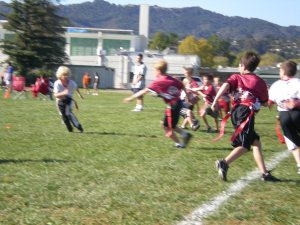 The other night, I went to pick Jake up from his football practice. I was so very ready to go home. It had been a long day of work; no homework had been completed; dinner had not been eaten; and Zach was hell bent on scaling the one part of the park’s play structure that looked so dangerous, it had to be an illegal engineering mistake. But alas, practice was not over. Jake and his buddies were now huddled around in their team meeting, looking very worn out and very serious. Like tiny little SWAT teamers doing a recap of some big operation.

Assured that Jake is currently where he is supposed to be, huddling with the other SWAT teamers, I shift my focus to Zach who’s back on the scary and forbidden play thing, only now while also pointing at his own eye with a stick. That’s when I hear a very familiar voice call out… “Mom. Mom. Mom. Mom. MOM!”

I look over, and there is my eldest, non-discreetly summoning me from the middle of his meeting. He sees that he has my attention, and hits me with his emergency. “What’s for dinner!?!?”

Granted, he does not have a lot of experience being in meetings. But I give him the abbreviated version of my laser eyes, and the universal hand signal for “turn around and listen to your coach, focus, and by the way, I have NO idea what is for dinner.”

Other than “how did I get out of your tummy?,” “what’s for dinner?” is probably my least favorite question. I know the answer about 25% of the time. Within that 25%– noodles, chicken nuggets, pizza, Subway and tacos really are the only place where there is any overlap of excitement from both boys, which comes to about 10%. I’ve already exceeded my math aptitude here, but that leaves a lot of stink faces, and “I don’t like that” and “can we please have macaroni & cheese or Subway or tacos or noodles?”

Sure, I’m frustrated and kinda harried and cranky looking on the outside, not to mention slightly distracted by a 5-year-old daredevil with a stick, but at the same time, a little relieved on the inside. Jake’s still 10, not on the SWAT team, and him knowing what’s for dinner currently trumps all of his other worldly concerns.

The disturbing  thing about watching major league sports is how many of these guys look like little boys. I mistook an Atlanta Braves pitcher and a pinch runner for bat boys, and I have a hard time believing that the Giants’ beloved Buster Posey has started shaving yet. The old men in the sport are a couple of years younger than John and I. Please notice, I include John in this to keep me from feeling so alone out here in the mid-thirties.

One thought on “huddle”