Two nights ago, I posted this as my Facebook status update:

Without mentioning anything about where exactly I drank that Orange Julius in 1983, a slough of people tapped into exactly what I had been thinking about all day: Sunrise Mall.

Maybe you had a Sunrise Mall. Maybe your Sunrise Mall was Sunrise Mall. John’s was Magic Valley Mall, and his eyes gleam as he waxes poetic about being dropped off there on a Sunday with a pocketful of quarters. But the mall – your mall, my mall – was a special, magical place. Especially if you were lucky enough to be a patron in the ‘80s and early ‘90s. Kids weren’t looking for $300 handbags or hitting each other over the head for $200 shoes. It was big big, epically big hair and Pac Man and Orange Julius. You know… the good ol’ days.

I saw Breakin’ Two, Electric Boogaloo there for pete’s sake, with my parents on a Saturday night. Only now, writing this, do I realize what a sacrifice this was on their part. They were probably scared to death. Of the clientele? Maybe, but I’m guessing, mostly of my aspirations. Thank you Mom & Dad!

Sunrise Mall held a world of possibility. Say you’re, oh… I don’t know, 13, and it’s oh… I don’t know, 1987. You’ve got $25, and 4 hours to spend it before your mom picks you up in her giant grey Chrysler Cordoba. You have no idea who you are going to run into, or what feather-haired hottie you might meet. Maybe something’s on sale at Miller’s Outpost or Chess King (if you’re a boy in the market for Z Cavariccis)? Maybe you want to get another inflatable Palm Tree at Zanzabar? Maybe you and your giggly friends will window shop for Swatches at Macy’s or cruise the Esprit section at Weinstock’s. Will it be Sbarro or Taco Bell or McDonald’s or Orange Julius? Where do you go first? Contempo? Wet Seal? Waldenbook’s? The hook rug store? (There was a hook rug store. I’m not kidding.) The candle store? See’s candies? Sadly, we never did go in the pipe shop or the wig store, Merle Norman, which now I see as missed opportunities.

When I put the Orange Julius post up, again with nary a mention of the mall itself, Erica who I met as an elementary school girl, was the first to reply wistfully, and from England, no less, “Oh Sunrise Mall…” Staci, who I met somewhere around kindergarten, remembered the octagonal benches that were outfitted in that signature orange and burgundy tile, where she liked to people watch. Then there was Laurel – one of my middle school go-to shopping friends, with whom I even traveled to our version of Mecca – the Esprit Outlet in San Francisco – while sporting matching striped shirts, Keds and permed hair. Anyhow – she remembered the Orange Julius crinkle fries with her mom and the fountain that held center court, where people would throw their change, their wishes, and their Orange Julius cups…yes, the fountain was the crown jewel of Sunrise Mall.

I look at my own kids and wonder if they are so overwhelmed with cool stuff and places and experiences, that the mall could not possibly hold the level of fantasy and coolness that it once represented for us. I used to daydream that I lived in, and went to school in the mall. I thought the most sophisticated people lived in the apartments at the edge of the parking lot. That the people revving the engines of their Z28’s outside, were forces to be reckoned with. Could the modern mall hold the same allure for my boys? Perhaps.

As I sat sucking down the classic Orange Julius that did in fact taste like 1983, I couldn’t help but enjoy how much the boys were enjoying our mall. They loved the Silly Bandz kiosk, nay, pavilion, that was the whole reason for our visit. There was a Mini Cooper parked on display by the elevator. Johnny Rocket’s has a patio that makes it feel like you’re sitting outside, when really you’re about 15 feet from Sears 2nd floor entrance. Two stores in a row have the same display of pillow pets. And then there’s the wonderment that comes with the fact that there’s a Wetzel’s Pretzels on one level, and an Auntie Anne’s pretzel shop exactly one floor down! And I know, without him saying anything, that Zach always has one eye out looking for Paul Blart.

You know what? Sunrise Mall is still there, but I refuse to go. I like it frozen in time in my head and memories. I like that I can go right back there when I see a Camaro, or acid wash, when I smell that intoxicating scent that is a mix of new clothes, perfume, hairspray, 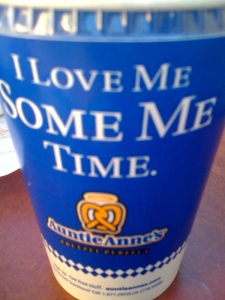 floorwax and nacho cheese, and of course, when I run across “Here I Go Again,” by Whitesnake.