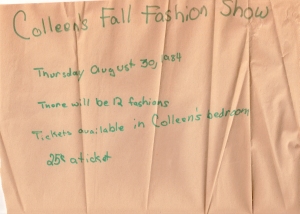 It’s fun to entertain the notion that I was born to relax or talk about TV because I excel at those things, but I think I’ve always known I was supposed to grow up and get to work. When I was digging through my old stuff at my parents’ house, I found this sign:

There will be 12 fashions

I know I’m the one who wrote it, but I love it. I like to picture freckled little 10-year-old Colleen earnestly creating 12 fashions, and making this sign, and then going ahead and charging mom and dad a quarter….each (sorry, no friends and family discount). Think back to your little kid self, and the stuff you did. You were figuring it out, shaping yourself for what was to come. There we were, the kiddo versions of us, trying out all kinds of careers, just by playing. Sure, you may not have played “analyst” or “consultant” but that’s ok… you might have if you knew those jobs existed and how glamorous they would turn out to be.

I always had a different imaginary job to help support five imaginary babies, Strawberry Shortcake, and an imaginary orange cat. I also had to supplement my imaginary husband’s postal service salary so we could make the payments on the two-story RV with the indoor pool.

What did you want to be when you grew up? Obviously my first choice was Pastor’s Wife (followed by mail carrier’s wife) and Director of Connecting Ministries at a thriving and fantastic Presbyterian Church. But after that, the list was long. It went something like this chronologically:

Drummer for The Go-Go’s

Architect (until I found out how much math was involved)

And yes, in my adulthood I entertained the idea of everything else on the list again except nurse, architect, and tennis player, due only to the fact that I have two bum knees.

Because we are always growing and moving forward, maybe we try on stuff as adults too, in anticipation of some next step or phase. If that’s the case, I have an idea of where I might be headed, especially if you were to peek into my house this week:

There will be 12 entrees