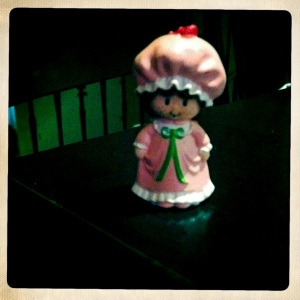 I had been back in my hometown for about 30 seconds when I heard my name being called from across the street. I stepped out of the car into the welcoming warm air to see my parents’, and formerly my, diminutive and ever-busy neighbor waving at me.

I waved back and she called out again, “Come here, I have something for your dad.” I followed her into the house that was neat and tidy and light and airy. I knew the floor plan well – it matched a third of the houses in the 1950’s tract neighborhood. Another third looked like the house I’d grown up in. She handed me a basket with a card for my dad who was healing up after surgery and on the mend. The basket was full of fruit, and I recognized the same distinctive curly cue handwriting that typically graces the first Christmas card that shows in our mail box each year. She asked about the boys and told me about her grandkids and we said our goodbyes, so I could unload the car and get the hospital to see Dad. Before I could even pull the suitcases from the trunk, one of the next door neighbor “kids” who was probably a good 15 years older than me, rounded the corner on his way to his dad’s house (who’s floorplan matches ours). “Hey there!” he called.

I was fumbling for my old key when I found two very warm cartons of milk sitting on the doorstep. It was Thursday, milk delivery day. My parents have had the same milkman my whole life – Dave…Dave, the milkman. When I mentioned the warm milk to my mom later, she said with a sigh she’d have to reduce the order again. Dad’s drinking soy now.

“You can’t quit the milkman,” I said.

Though I eventually grew to at least enjoy the uniqueness and kitsch factor of having a milkman, I may have at some point asked “why can’t we get our milk at the store like everybody else?” (I know now that kids don’t appreciate things, as much as you beg them too. The hope is that someday they will, I suppose, and then be brave enough to tell you as much.)

My brother was in town too. He’d staked his claim by tossing his stuff in the blue room, which was most recently mine. I took my INXS poster out of there when I left for college, but alas it was truly Scott’s old room. It had only become mine, and blue, when Scott graduated from college and took his Jimmy Buffett and English Beat albums out once and for all. I think he half expects back rent for my time spent there, and maybe an additional fee for the intense shade of baby blue I’d insisted on immediately upon his departure.

That would put me in the smaller green room for this stay; the room where my canopy bed once was, and where the Tooth Fairy could find me, where I’d lip sync to the Go-Go’s, and where the neighbor kids would come to knock when it was time to play. John and I call it the Sleep Chamber; its blackout shade allows the lucky slumberer to blissfully snooze to noon with nary a care. No TV, but that’s ok, the sleep chamber was secretly a boon.

A couple of days later, after much discussion over the weirdness of just the four of us in the house for the first time in 25 years, Scott vacated the blue room to get back to his family. So with mom and dad both home and watching the news (hellooooo, every day of 1986), I started nosing around my old drawers and shelves.

Enough had changed in each room to keep them from looking like shrines to our childhood, but enough had stayed the same to never let memories be too far out of mind. In addition to stacks of photos – childhood friends, puppies, neighbors, vacations, there were a handful of toys, including a miniature Strawberry Shortcake wearing a nightcap and nightgown. I followed my first instinct which was to immediately put her to my nose and take a huge sniff. I really didn’t expect to smell anything, but there it was….the unmistakable smell of Strawberry Shortcake. If you’ve ever smelled her, you know what I’m talking about. It’s strawberry and something else, I don’t know what, but it’s very specific to her. And as I stood there maniacally smelling an old doll, the summer of 1982 came back in one crazy rush, as it tends to do when you’re already feeling nostalgic. Seeing both E.T. and  Annie in the theater and hitting the mother lode on my birthday – I got Strawberry Shortcake, an Annie electric toothbrush, the Annie locket, a huge book about Princess Diana, a chic ribbon choker, stuffed E.T., and E.T stickers, and that’s just the stuff I remember.

The smell was also very specific to one glorious sleepover that summer. I had friends, sisters from the church I attended, who had a pool, matching strawberry pajamas (including a set for me) aaaaand……waterbeds. We splashed in the pool until we were good and sunburnt, then focused on Strawberry Shortcake and her cohorts Apple Dumplin’ and the Purple Pie Man, bringing them to life to befriend Barbie. I was more than likely wearing one of my sparkly appliqué shirts with a cool saying like, “Foxy,” or “Nano Nano” from my favorite TV show, Mork & Mindy.

We do the same kind of archaological dig when we visit John’s old room….we find term papers; Michael Jordan basketballs, posters, and clippings, John’s Student Body President campaign trucker hat, and inevitably his prized possession – his model of the General Lee, from The Dukes of Hazzard. I’ve never seen him smell any of it.

I half-heartedly looked around for the Nano Nano shirt to show the boys, but came up empty handed. Instead, I tucked Strawberry Shortcake into a plastic bag to preserve whatever scent was clinging to her little body.I proudly handed her to John to smell when we were reunited. He says he couldn’t smell anything. Boys.

4 thoughts on “don’t call that vintage: your old room”