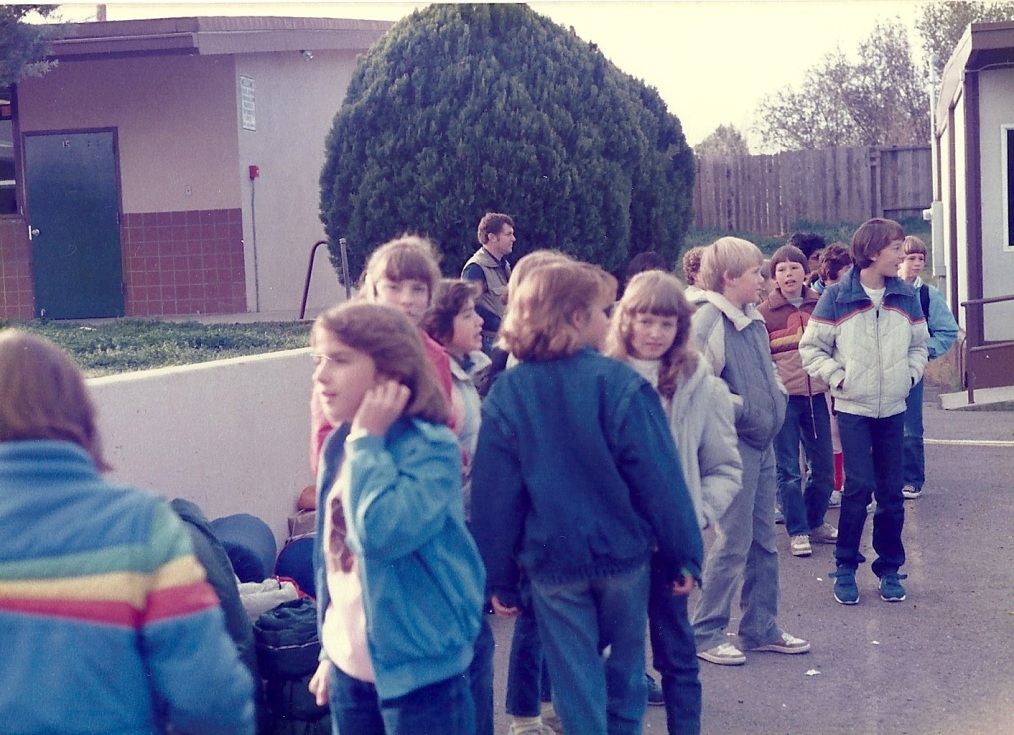 Dad called with the news. “They’re closing your school.”

(Sorry, Bears, Trees and Bruins, not that other school of mine you love to hate.)

“They voted… it will close next year.”

“I’m sorry, that’s sad,” John said sincerely when I told him the news, “I still get sad when we drive by my old school.”

John’s long abandoned elementary school is for sure, totally haunted. Lincoln Elementary, brick and forlorn, sits abandoned on the main road in the small Idaho town of his childhood, still sporting a reader board that now says “ead to you ids 20 mins a day.”

John’s high school moved somewhere else too, leaving the hallowed halls he once roamed to become a rock climbing gym or self storage center, or possibly both.

John’s were those cool “inside” schools of John Hughes movies with real cafeterias and giant lockers for winter coats; cool to California kids who were stuck eating outside and with classrooms that opened directly into all that sunshine instead of echoey hallways that probably smelled like sweat and old paper.

During our 15 years of marriage, I had not been terribly sensitive to the fact that those pieces of John’s youth had been summarily shuttered.

Of course I don’t like that my school is closing. Opened in 1957, Sierra Gardens has weathered a lot. Think of all those little Mustangs talking about Nixon, Kennedy, the Vietnam War, the civil rights movement, and astronauts landing on the moon. We heard about the Challenger disaster in the middle of class, and worried about Russians parachuting down onto the playground, like in Red Dawn.

Whoever voted to close it obviously didn’t scamper down to the creek’s edge, play kickball in the lower flats, or Chinese jumprope outside Room 20.  They didn’t wonder why the basketball courts were always covered in seagulls or  taste Doritos for the first time at their 3rd grade desk. They didn’t learn to spell stuff there, and read stuff, and write cursive without really understanding why a capital cursive Q looks like a 2. They didn’t know which drinking fountains would give barely a trickle or shoot you straight in the eye. They didn’t learn they hate math and love writing and that Shel Silverstein was a genius. They didn’t have a principal with a handlebar mustache or a first grade teacher named Mrs. Beaver.  They didn’t get to be the Student Body Secretary or dutifully wear their Mustang T-Shirt on Spirit Day, or make the friends that I made there.  Nope; because if they did, Sierra Gardens would be getting a historical registry number instead.

My friend Doug wrote a bit in his blog about the liability of being too sentimental; something of which I am terribly, terribly guilty. I am an advocate for change and progress, but a big sap at the same time, which makes for a lot of confusing feelings.

*That photo up there gives you a peek at one corner of Sierra Gardens, circa 1985. That’s me in the grey jacket and the extra bangs cut specifically to cover  my surprisingly normal looking ears. Mostly though, it’s my amazing, quirky, smart, kind, funny, talented class and group of friends from Room 20, whom I am very proud to know then and now. I guess just like a church isn’t the building, a school isn’t either.

12 thoughts on “but that’s my school: the mustang swan song”