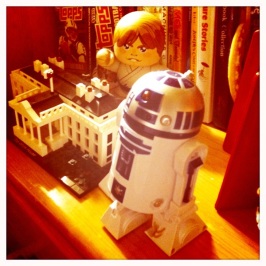 Other than the self-diagnosed situational agoraphobia, I think I would do ok in space.

Not a spaceship as much as a space colony, after they’ve had a chance to work out the kinks. If it’s a space colony, I suppose we’re thinking about the future. And not a dystopian Hunger Games future where we’d all have to work together to snare rabbits for survival and overthrow an oppressive and evil government with nothing but our wits and a map. I was thinking more of a Jetsons set-up — pellet food, space mall, low-profile furniture – pretty much anywhere there’s a robot lady who can help me navigate the day.

“Do you have Siri?” I ask anyone with a new phone, hopeful I can have a chat with the intriguing electronic personal assistant.

How are you not using it? Have you SEEN those commercials?

Many mornings I wake and grab my non-Siri phone and talk into it without lifting my head from my pillow.

“Pre-tty cra-ppy…you have ele-ven mee-tings,” I say back to myself in my best robot voice.

Today, I had a few minutes with Siri’s electronic sister when I called the bank. Because I had forgotten my password, we got to spend  a few minutes chatting. She’d ask me something, and I would slowly reply. She’d tell that was wrong, and to try again.

When she mis-heard me and I had to repeat myself, she said “Sor-ry, my fault,” and I felt bad. I wanted to tell her that it was indeed my fault because I mumbled, but that’s too many words and I didn’t want to blow her robot lady mind, and be forced to start over.

I know technically, it’s more accurate and PC (ba-dum-dum) to say “computer lady,” but my imagination always puts a robot with the disembodied voice. Keep in mind, I still do not understand the technology that makes a fax machine work.

Just like when Morgan Freeman is the spokesperson for anything, I find I accept what the robot lady says without question. Not every robot lady, but most. Our GPS offered us two voice options when we set it up. The first was a little too breathy and adult. I felt uncomfortable having her talk in front of the children. So we went with the English accent. Sure, she gets annoyed when I miss a turn, but with an implied sage wisdom, she redirects me just like Mary Poppins would, and we are on our way.

The reigning queen of the robot ladies though, is the one who’s in charge of the airport.

If one were actually flying to space, there is no way that it could feel as much like going to space, as Terminal 2 of San Francisco International Airport. The robot lady tells you which shuttle to board, reminds you to hold on, carefully disembark, and not to forget your belongings.

I think she’s the one who talked me into the tofu and shitake spring roll (basically a tofu-packed space food pellet), with a coconut water. I found myself sitting in an egg shaped chair at an egg shaped table, eating it out of a plastic box, when there was a perfectly good cheeseburger available 7 feet away.

Female robots have been an integral part of our cultural landscape for decades. Kudos to my personal favorites, Rosie the Robot (so full of sass!) and  The Bionic Woman, Jaime Sommers (full disclosure, she was like, half robot). I was a proud owner of the Bionic Woman doll, with the roll up arm skin and removable face that revealed her circuitry. Don’t even get me started on what would happen if Barbie and Jaime were to get in a street fight. But sadly, more often than not, female robots are depicted negatively – from the Stepford Wives (spoiler alert!) to the Fembots, whose you-know-whats double as machine guns.

We’re looking to you Siri, to turn this around, and when I finally get you, maybe you also can remind me to hold on, grab my suitcase, get to my meeting, and hydrate.

How I’m ok with the robot lady when mannequins give me the uber creeps, I shall never know.

*The photo above is another favorite robot, R2-D2. Is a Droid a robot? Am I going to hear from all the Star Wars fanatics that an R2 unit is NOT a robot? He IS s guarding the LEGO White House, so relax, he’s a hero. I have plenty of Transformers, and Star Wars guys in my house of boys, but no lady robots, so R2 will have to do as my visual aid.