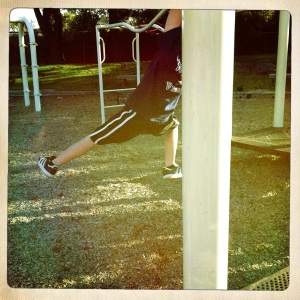 “You’ll fall. You’ll throw up. You’ll pinch a finger. You’ll land on your head. You’ll squish a little kid. I won’t be able to find you.”

The boys prefer to leave me at home when they go to the park. For a while I had unapologetically forbidden them from visiting the playground down the street. There were no sides on the tall slide, and the bottom where kids were supposed to slow to a stop was just sheared off metal. The ground cover seemed to be equal parts tan bark, glass shards, and cat/dog/raccoon/deer/fox/mountain lion/horse poop. There’s a lake in that park; it’s practically the wilderness.

But then the city went and replaced it with brand new play equipment and that space aged spongy ground cover; I had to find some other danger to fret about.

The New York Times ran an article this summer citing a study that our new safe playgrounds may be depriving an entire generation of the adventure, risk, reward, accomplishment, and self esteem necessary for them to become healthy and well balanced adults. Worse than the potential injuries, we might be instilling more fear and more anxiety into our kids by keeping them too safe.

I don’t know…I fell out of a tree house once, and that’s likely why I boast a fairly healthy anxiety about my kids falling off of, or out of, stuff.

The rule of my childhood neighbor’s tree house was you could use the ladder going up, but you had to jump out of the tree to get down. I now know that was likely not sanctioned by their parents, but….a rule is a rule. I scooted to the edge of the five or six planks that were nailed together to create the “house” and sat there for a long time. When I’d gathered enough courage, or had succumbed to the peer pressure, I gave myself one final push, at which point my favorite lavender eyelet shorts hooked onto a wayward nail. There I dangled cartoonlike by my shorts from a tree with no way for the other little kids to get me down. Those adorable shorts finally gave way, sending me plummeting to earth. It hurt like the dickens but I miraculously didn’t break anything, other than my shorts. I limped home, blubbering, and covering my rear end with my bruised and bleeding hands.

The crowning jewel of the Sierra Gardens Elementary playground was the Eagle’s Nest that sat outside Room 5. Kids would race to scramble up the side of the rounded metal climbing structure, hoping to be the first to reach the pinnacle where they could sit and survey their kingdom, the Sir Edmund Hillary of 2nd grade. Sometimes, you would climb back down the side, or, on a dare, you would let yourself hang from the top before your sweaty hands would give out, dropping you down into the sawdust.

I spent many a lunch recess across the blacktop at the simple bar that was cemented into the ground by the swings, and designed solely for the purpose of swinging around and flying off, like Mary Lou Retton. Every trick had a dramatic name; of which I now only remember pieces: The Cherry Something, Dead Man’s Something (which should have been named the Arm Breaker), and The Such-and-Such Drop, with all of the two-handed, one-handed, backward and forward variations.  There was never ever enough sawdust to actually cushion a fall, and I’m fairly certain that’s where I said my first swear word. 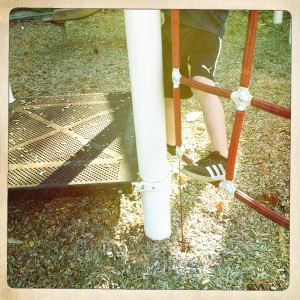 Modern playgrounds still look plenty dangerous to me. There is always that one part of a play structure where, no matter how new and up to code it may seem, you can imagine a kid just falling unceremoniously over the side, bypassing the sliding pole altogether. The monkey bars are still awfully high, and don’t even get me started on blisters. What if some big kid goes bananas on the wobbly bridge, and to be funny, wobbles the little kids right off?

When we take the boys to San Francisco, they beg to go to a park that sits nestled in our old neighborhood.

There are reclining seats suspended from the mile-high slide, and a tall climbing cone sits atop a merry-go-round (climbing and spinning in the same convenient structure!). Jacob flew straight to the top of the cone and encouraged passing kids to spin it. I hollered up to him with the very necessary reminder to hold on and not jump. When he was in pre-school, our first teacher conference included this feedback, “we always have one playground teacher assigned to Jacob; he will jump off of anything.”

John and I watched our smiling eldest whose vantage point surely gave him a view of the Pacific Ocean. As I was standing there willing him to hold on, we turned to find a flurry of activity behind us.  A mother was sprinting to a child who was spinning wildly out of control on a small seemingly benign stool. Little legs were flying around in a blur. It was Zachary. The woman had saved Zachary from spinning off in the direction of the sea, while I stood inches away concentrating on the kid in the sky. We thanked the hero profusely and checked on Zach whose face reflected nothing but shock after his centrifugal episode.

“How did that happen Zach?”

He wondered off wordlessly leaning a bit to the right.

I sat down, and pushed at the ground a little with my toe. Before I knew it, it was spinning and I was yelping, incapable of displaying the same stoic demeanor as my 6-year-old.

I was at once horrified and amazed at the marvel of engineering. The unassuming little seat was simultaneously low to the ground and terrifying – the perfect combination for my peace of mind, and my child’s future emotional health and sense of accomplishment and adventure. 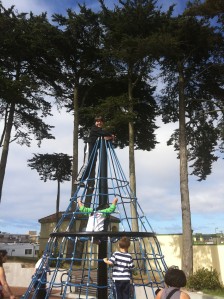 4 thoughts on “play it safe”